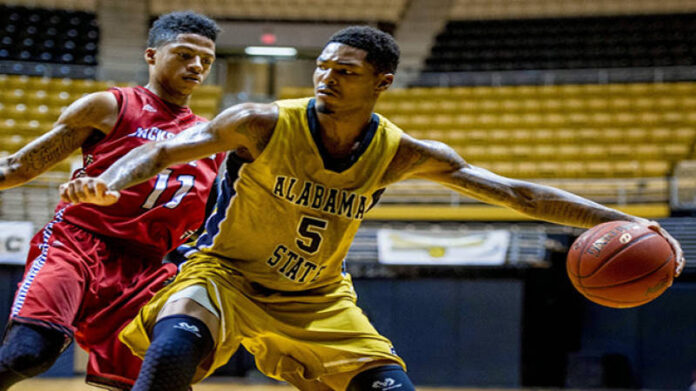 Bobby Brown led a trio of double-digit scoring Hornets with 16 points as Alabama State finished the pre-conference part of their schedule with a 76-65 win over Fort Valley State.

It was a game that has been a lot like several of ASU’s games as they had a hot-shooting opening half and then their shooting fell off in the second half.

Wendell Lewis scored 13 points and Luther Page came off the bench to score 11.  ASU finished the game shooting 44 percent for the game, and that includes 36 percent from beyond the three point line.  ASU also struggled from the free throw line hitting 14 of their 27 attempts (52%).

The Hornets (4-5) looked to break open the game coming out of the locker room in the second half outscoring FVSU 13-4 to build their largest lead of the game at 54-34.

After that the Wildcats (0-8) fought their way back into the game and cut the lead to nine points on a couple of occasions, the last at 69-60 after a three point field goal from Ralph Wilson, who scored 13 points.

Derrick Spear scored a game-high 18 points for FVSU and Tyrone Brinson came off the bench to score 14 as the visitors finished the game shooting 44 percent from the field.

FVSU came into the game only averaging five three point field goals per game, but every time the Hornets would pull away FVSU would sink a long range jumper, finishing the game with eight.

The Hornets used a 52 percent shooting performance in the opening half on its way to building a 41-30 halftime lead.  Part of that hot-shooting was knocking down five of their 10 three point field goals.

Brown led the way with eight points, including opening the game with a three-point field goal and being fouled on the play.  With the free throw it was the Hornets first four-point play of the season.

Lewis also scored eight points in the opening half and Robinson added seven.

ASU’s defense held the Wildcats to 39 percent shooting in the opening 20 minutes, but the visitors, started hitting three pointers early and hit four in the first half to stay close.  Wilson and Spear had six points each to lead FVSU.

Fleming made a layup and, after a steal by Bobbitt, Aaron Valdes made a dunk to push Hawaii’s lead back to eight with less than a minute left.

LAS CRUCES, N.M. — Ian Baker scored a layup with 2 seconds to play to give New Mexico State a 54-52 comeback win over Texas Southern on Tuesday night.  This comes two nights after the Tigers knocked off Kansas State with a buzzer-beater.

Baker hit two free throws and a 3-pointer and the Aggies pulled within one, 33-32, early in the second half. Baker’s layup at 7:21 put the Aggies up 43-41, but Texas Southern’s Jason Carter hit a jumper to tie it at 55 with 1:03 to play. The Aggies’ Remi Barry missed a layup but DK Eldridge got the offensive rebound and New Mexico State called timeout with 22 seconds left. Baker made his game-winner on the ensuing possession.

Alcorn shot 33 percent in the first half connecting on only 11 of its 33 attempts.  The poor shooting continued in the second as the Braves went 12-of-48 from the field for 25 percent.

MURRAY, Ky. — Jarvis Williams had 17 points and nine rebounds to lead Murray State to a dominating 76-39 victory over Alabama A&M on Tuesday night.

Jeffery Moss made 3 of 5 from long range to total 14 and T.J. Sapp nailed 4 of 7 from beyond the arc, also scoring 14 for Murray State.

The Racers ran out to a 25-5 lead midway in the first half and were up 43-17 at the break. Alabama A&M never challenged.

Murray State started hot and stayed that way, making 29 of 55 from the floor (52.7 percent) while limiting the Bulldogs to just 11-of-45 shooting (24.4 percent). The Racers dominated underneath grabbing 41 rebounds compared to 26 for Alabama A&M. Murray State also had 20 assists and nine steals.