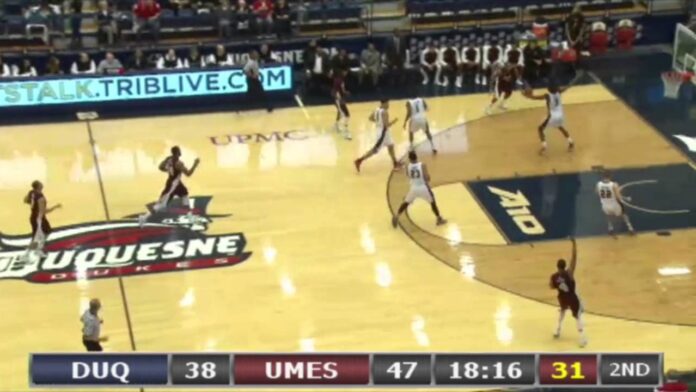 
UMES (7-8) put together a complete offensive performance, inside and out, on the way to their third win of the season against an Atlantic 10 opponent, all on the road.

The Hawks’ offense got off to a blistering start, leaping out to a first half lead with phenomenal three-point shooting. Devon Walker led UMES with a scorching first half, shooting 5-of-6 from three-point line, including a four-point play.

UMES led by 15 points after two free throws by Mike Myers (Camden, N.J.) with 3:21 before halftime, but the Hawks went on a scoring drought.

Duquesne finished the half on an 8-0 run to cut the halftime deficit to seven points, 45-38. As a team, UMES shot 66.7% from the floor in the opening twenty minutes, and 8-of-11 from beyond the arc.

The incredible shooting in the first half forced Duquesne to make defensive adjustments, and UMES countered by changing their attack.

The Dukes switched from a 2-3 zone to man-to-man defense, as the Walker and company busted the zone with shots over the top.

The Hawks responded by exploiting the favorable 1-on-1 matchup down low with Myers in the second half.

The senior forward had just four points at halftime, but Myers finished with a double-double at 22 points and 14 rebounds. Myers was a beast on the offensive glass, cleaning up on five offensive boards with numerous thunderous dunks.

Duquesne battled back to within two points, but UMES never relinquished the lead down the stretch. A jumper by Micah Mason cut the Hawks’ advantage down to 54-52 with 10:17 to go.

Myers threw down a slam dunk, followed by another huge three-pointer by Walker to slow down any Dukes’ comeback. The Hawks kept enough distance from Duquesne, maintaining at least a two-possession lead for the remainder of the contest.

Myers paced the Hawks with his first double-double as a Hawk, setting career-highs in both points scored (22) and rebounds (14). Walker nearly matched his career-high in scoring, settling one point shy at 21 points for the afternoon.

The Hawks’ offense did not slow down one bit after their impressive showing at St. Bonaventure. After scoring over 70 points just once in their first 13 games, the Hawks have scored at least 78 points in back-to-back victories.

UMES shot 57.1% from the field, including 9-of-15 from deep for the game. The Hawks outrebounded Duquesne, 32-30, creating 13 second chance points, primarily from the effort of Myers.

With the win, UMES improves to 7-8 on the year, setting up an opportunity to climb back to an even .500 in their next game. With their seventh victory, the Hawks have already surpassed its overall win total from last season, all before the end of non-conference play.

UMES is now 3-1 vs. the Atlantic 10 Conference this season, with all four games coming on the road. Prior to this season, the Hawks’ basketball program had not defeated a current A-10 team in 45 years.