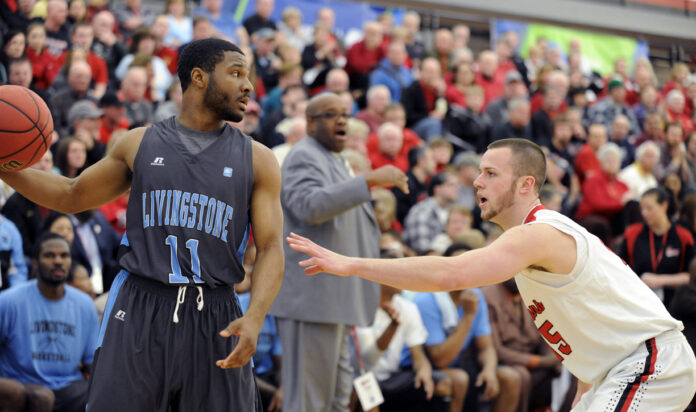 Mark Thomas will no longer be able to play basketball at Livingstone.

One of the most decorated athletes in school history, including being the first recipient from an HBCU to receive the NCAA’s 2015 Top 10 Award, will be sidelined due to a heart condition.

After passing out during a pickup game in July and being rushed to a Charlotte hospital, Thomas was diagnosed with hypertrophic cardiomyopathy, which is often asymptomatic and a leading cause of sudden cardiac death among many young athletes that took the lives of  Boston Celtics swingman Reggie Lewis and Loyola Marymount star Hank Gathers.

The diagnosis means his college basketball career is over.

“I’m not sure how I felt when the doctor told me the news,” said Thomas, who recently underwent surgery to be fitted for a defibrillator. “The whole time I still thought I was going to be able to play basketball.”

“Mark Thomas is one of the best student-athletes I’ve ever coached,” Stinson said. “He played exceptionally well for Livingstone for three years while maintaining an outstanding academic record. I was shocked when I learned about his condition, and my heart goes out to him because he’s such a fierce competitor. But knowing Mark, he won’t let this get him down. He’ll rebound and emerge even stronger.”

While maintaining a 3.71 GPA, Thomas led his team to its first NCAA Division II national championship tournament appearance in 2013 and again in 2014, where Livingstone captured its first CIAA championship.

While leading Livingstone to the CIAA title, Thomas was named Tournament MVP and CIAA Player of the Year – a first in school history. He scored more than 1,000 points during three seasons at Livingstone and holds CIAA records in steals, points per game, points and 3-pointers.

Learning his playing days are over wasn’t easy for Thomas, a Saginaw, Mich., native who has excelled at hoops since he was a kid.

“I miss basketball, but I did enough at school to where I can look back and say I had a pretty successful career,” Thomas said. “I did a lot to help Livingstone and the community, and I feel like I’m a role model. If I can still be around basketball in some way, perhaps as an assistant coach on the collegiate level, I feel like I’ll be fine.”