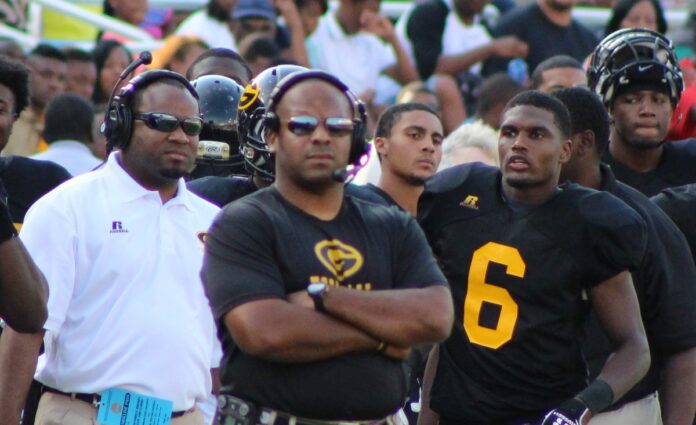 Broderick Fobbs made the right call.

There is no need to question his decision to allow Grambling quarterback Johnathan Williams to bury his way into the end zone to tie Southern in the final seconds of the Bayou Classic.

Fobbs is old-school. He’s been between-the-tackles. He’s earned it through grit, will and toughness with the heavy formation out there in short yardage situations. That’s the well-balanced football diet he grew up on. If the offense can’t get a yard, you don’t deserve to hold up the trophy in a down pour of confetti.

Grambling not gaining one more yard in a 52-45 loss ended their season.

It hurt so much.

Several players collapsed on the field in crushing disbelief, overcome with the sudden emotional pain of realizing they came within inches of keeping this unexpected run alive.

Let’s not blame the man who helped lead Grambling to that point in the Superdome, though.

Every decision, every move Fobbs made since talking control of the program in the midst of chaos has been on target.

Williams was the third-string quarterback when the season started. It was Fobbs who allowed him to grow into the position, although he had experienced signal-callers lying in wait.

It was Fobbs who made certain that the program would remain focused on 2014, not 2013. Last season, and everything that transpired, would not spill over into his regime.

He held true to his word with unwavering coachspeak when pressed by media hounds wanting him to rehash the scandal.

This look ahead mentality allowed Fobbs’ Tigers to stay even-keeled through an 0-3 start to all the national attention during their seven-game winning streak.

The standard had been raised.

That approach placed Grambling — a team that had won just twice since 2011 — within a yard of possibly playing for the SWAC championship after being on the cusp of being blown out.

In a world where we immediately want to feast on nectar of failure after the fact, there just isn’t a rational conclusion anyone reading this could make that finds fault with a first-year head coach who turned hopeless into hope in just a few months.

Fobbs knew more than everybody else. He bristled at the notion Grambling was not good enough to compete right away. He proved us wrong through the evidence between the white lines.

Losing with the championship on the line doesn’t change that honest confidence.

“There are times you’re going to fall but as long as you don’t stay down that’s the key,” Fobbs said. “The kids in that locker room are going to go on and be successful in life.”