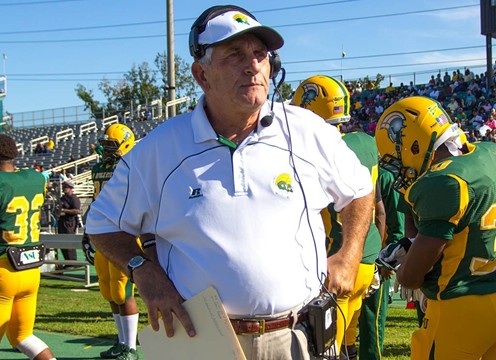 “My time at Norfolk State has been terrific,” Adrian said. “The players and the administration have been great to work with, and I will miss them very much. But after 46 years in coaching, I feel like I need to spend more time with my family while I can. I am very grateful for the opportunity to coach at NSU and to the fans and University administration for the support they have given me.

“My No. 1 goal when I came here was to graduate student-athletes, and I think we’ve done a good job of that.”

“I want to thank Coach Adrian for his service to Norfolk State University and the commitment of his family during this significant period in their lives,” NSU Director of Athletics Marty L. Miller said. “I have had the opportunity to work with one of the finest individuals in all of college athletics. He was instrumental in establishing an environment of academic success for the football student-athletes and attaining success on the football field that we had not experienced before on the Division I level. He will be missed by the Spartan family as well as the many friends that he made in this community. We wish him much happiness during his retirement years.”

Adrian steps down after leading the Spartans to 54 wins during his tenure (54-60), making him the second-winningest coach in school history. Only Dick Price (62-41-4) had more wins in Spartan history. Adrian and Price both coached 10 seasons, more than anyone else in program history.

Adrian came to NSU in January of 2005 after serving as defensive coordinator at Bethune-Cookman. The Spartans had gone 2-19 in the two seasons prior to Adrian’s arrival.

But under Adrian, the Spartans compiled four winning seasons after having none since 1996. Those winning seasons – one in 2007 and three straight from 2009-11 – were the first four in NSU’s Division I era.

The highlight of Adrian’s on-field successes at NSU undoubtedly came in 2011, when the Spartans won their first-ever MEAC football championship and competed in the Division I FCS playoffs for the first time.

Their 9-3 record that year ranks as the second-best season in school history, trailing only a 10-2 mark in 1984.

The 2011 MEAC title was also NSU’s first conference football championship of any kind since that 1984 team won the CIAA crown.

Adrian was twice named the MEAC Football Coach of the Year, after leading NSU to a conference runner-up finish in 2007 and after the championship season in 2011. He was the first NSU football coach to ever earn the MEAC’s Coach of the Year award in football.

In both seasons, he was also a finalist for the Eddie Robinson Award, given annually to the FCS coach of the year by The Sports Network.

In 2011, he was named the FCS Coach of the Year by the College Sporting News and also was the Norfolk Sports Club’s recipient of the Tom Fergusson Award as the area’s Metropolitan Person of the Year in Sports.

In 2007, Adrian won the Norfolk Sports Club’s J. Roy Rodman Memorial Award as the Virginia Collegiate Coach of the Year, another first for NSU.

In addition to the 2011 MEAC title, the program achieved many other notable milestones under Adrian.

They included the program’s first NFL draftee since 1996 (Don Carey in 2009), first-ever Division I FCS national ranking (coming during the 2007 season), highest-ever national ranking (No. 19, in 2011) and first victories over FCS ranked teams (three, the last being a win over eventual MEAC co-champion and No. 12 ranked Bethune-Cookman in November of 2013).

NSU players earned 55 All-MEAC awards and 15 different Spartans earned All-America recognition since Adrian took over, with more yet to be announced later this year. NSU’s successes were also resounding off the field.

This December alone, 18 current and former Spartan football players are slated to earn their degrees.

Fifteen of the 19 seniors on the 2014 team are on pace to earn their degrees this academic year.

Adrian, who was formerly a head coach at Bloomsburg (Pa.) and just completed his 41st year as a college football coach, ends his career with a 90-97-1 ledger as a head coach.

The native of Brilliant, Ohio, has coached at the high school, college or professional levels for the last 46 years.

Running backs coach/recruiting coordinator Paul Macklin and defensive line coach Mark Thurston have been assigned to work with Miller in coordinating the football program’s activities until a new head coach is hired.

All of the current assistant coaches’ contracts expire Dec. 31.