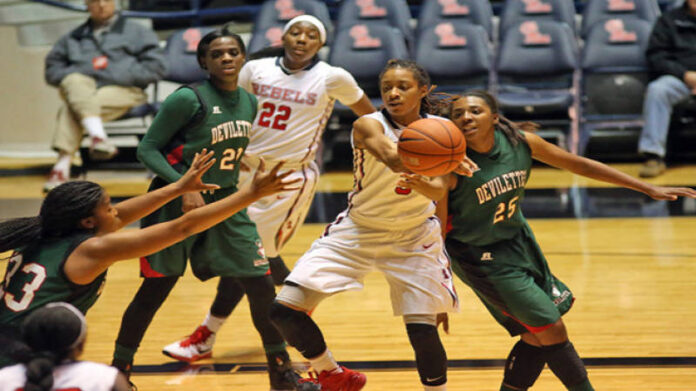 BIRMINGHAM, Ala. – Below is a list of the Southwestern Athletic Conference basketball games for the weekend of November 14-16.

Oxford, Miss. – The Mississippi Valley State women’s basketball team fell 38-91 to the Ole Miss Rebels on Sunday afternoon at the Tad Smith Coliseum. MVSU went 18-24 from the free throw line, shooting 75 percent. As a team, they shot only 23.8 percent from the floor.  Mississippi Valley ended up out-rebounding the Rebels by two, 45-43. Ashley Beal led the way for the Devilettes scoring nine points and four rebounds. A’Shanti Weathers and Chelsea Mabry each chipped in eight points.

Lincoln, Neb. – No. 16 Nebraska defeated Alcorn State 49-83 Sunday afternoon at the Pinnacle Bank Arena. Olivia Brown led Alcorn State with a game-high 21 points on 8-14 shooting from the field, while Jazmin Stranea added 11 points, including knocking down three out of four three point shots.  As a team, Alcorn State hit 33.9 percent (19-56) of its shots, while going 4 of 12 from the three point range and make 7 of 8 free throws. The Huskers led 46-26 at the half.  They took their largest lead in the game at 38 points after the second three-pointer by Anya Lakenta was made with 6:52 left, pushing the score 78-40.

Murray, KY – The Lady Bulldogs of Alabama A&M fell to Murray State 102-81 Sunday afternoon at the CFSB Center. The Racers took control in the first half by going on a 20-0 run to take a 24-8 lead.  The Lady Bulldogs began to fight back after taking advantage of the fouling from the Racers.  Alabama A&M made 7-8 free throws to bring the score to 33-19 with seven minutes remaining in the first half. AAMU slowed down the Racers offense by applying some tough defense. Although Murray kept the lead going into halftime, the Lady Bulldogs were only down ten points, with a score of 42-32. Unfortunately, Murray State came back in the second half fired up and they wouldn’t let up the remaining of the ball game. AAMU had three players score in double figures. Jaylan Snowden scored 26 points and added five rebounds and two steals. Brittney Strickland racked in 18 points and pulled down seven boards. Brooke Dixon chipped in 10 points and seven rebounds.

Stillwater, Okla. – Texas Southern dropped their season opener, 58-77, to Oklahoma State Sunday afternoon.  The Lady Tigers trailed heavily majority of the first half but they picked up their momentum late, ending the period 42-31.  Diamonisha Sophus opened the second half with a quick jumper cutting Oklahoma lead to only nine points.  Texas Southern was back in the game but unfortunately was limited shots the remaining of the game. Brianna Sidney ended the game with 14 points and four rebounds. Alexus Johnson added 11 points and had a game-high of nine rebounds.

Omaha, Neb. – The Lady Braves dropped their season opener, 59-39, to Omaha Saturday night at the Sapp Fieldhouse. Henrietta Wells got things started for Alcorn a little over four minutes in the first half with a short jumper.  Olivia Brown came back about two minutes later and scored a three pointer. Less than a minute later Brown was good for another three, making the score 9-8, with Alcorn being down by one.  The Lady Braves tied the score 17-17 with 5:02 remaining. The score was tied 22-22 going into halftime. Omaha’s Cat Cox wasted no time hitting a jumper at the 19:16 minute mark. Things went Omaha’s way when they went on a 17-0 run with ten minutes remaining in the second half. ALCN wasn’t able to recover from that point.  They were outshot by 20 in the second half.  Olivia Brown had a game high of 13 points and chipped in two rebounds.  Ashtin McNichols pitched in seven points and four rebounds.

Cincinnati, OH – Arkansas-Pine Bluff fell 57-73 in their season opener to Cincinnati Saturday night at the Fifth Third Arena.  Carlisha Walker scored the first basket for the Lady Lions two minutes into the ball game.  UAPB took the first lead,17-16, when Destiny Ham made a layup with 7:53 remaining. The score was tied four times. The Lady Lions were down by four points going into half time.  Cincinnati outscored Arkansas-Pine Bluff 40-28 in the second half. UC made a 16-6 run in a little over six minutes.  They out rebounded UAPB on both ends, offense (18-9), defense (37-25).  Destiny Brewton lead the way for the Lady Tigers with 11 points.  Charisse Carr chipped in ten points and Jazmyne Victorian scored nine points and pulled down eight boards.

Oxford, Miss. – Grambling State University kicked off their season  Friday morning as they faced The University of Ole Miss at the C.M. Tad Smith Coliseum.  The Lady Tigers fell 67-92 to the Rebels.  Dierra Ely scored the first two points for GSU from the free throw line at the 19:49 minute mark.  The Lady Tigers were awarded 10 attempts at the free throw line six minutes into the first half of the ball game.  GSU took the first and only lead in the 18th minute (9-6).  Grambling State was neck and neck with the Rebels majority of the game.  The first half ended 37-45, Ole Miss up. Second half started off a bit slower for the Lady Tigers as the momentum began to change and they found themselves trailing behind 47-62 at the 12:45 minute mark.  The Rebel took the biggest lead (59-82) off a free throw from Danielle McCray with 6:18 remaining.  Dierra Ely scored a game high of 14 points and also pulling down four rebounds.  Mariah Gilliam also had a game high of 14 points, with three assists.  Shakierya McClendon added nine points for the GSU Lady Tigers.

Montgomery, Ala. – The Lady Hornets kicked off their season with a 75-66 win over Stillman College Friday night at the Dunn-Oliver Acadome.  Tabitha Bradshaw got things started for Alabama State.  She made a short jumper 26 seconds into the game.  ASU lead the entire first half, ending it 38-27.  Samantha Thomas wasted no time in the second half when she hit a jumper at the 19:49 minute mark. The Lady Hornets took the biggest lead, 71-54 with only 4:19 remaining, leading by 17 points. Bradshaw racked in 16 points, adding two rebounds.  Brittney Wright scored 10 points and pulled down nine boards, six of those being on offense.  Jasmine People also scored 10 points with eight rebounds.

BATON ROUGE, La. -The Lady Jaguars defeated No. 22 University of Mobile 84-51 during their season opener  Friday night.  Southern scored first, on a pair of free throws.  Mobile didn’t put up their first points until four minutes into the game. The game tied one time in the beginning of the first half, 4-4. SUBR pulled away with a 10-0 surge.  Later, they took a 42-22 into the break and never looked back. Southern had five players score in double figures. Britney Washington led the Lady Jaguars, registering 20 points, three rebounds, three blocks and five assists.  Kendra Coleman chipped in 15 points and Jasmine Jefferson notched 14 points and grabbed 11 rebounds. Ashley Williams scored 11 and Keonia Parrish had 10 points.

Cape Girardeau, MO – The Lady Bulldogs fell 38-66 in their home opener to Southeast Missouri State Friday night at the Show Me Center.  Alabama A&M trailed behind the Redhawks for the first few minutes of the game.  Brooke Dixon scored the first two points from the free throw line when Connor King fouled her going up for a layup at the 17:36 minute mark.  Southeast Missouri State when on a 12-0 run in a four minute span, pressing the lead to 23-9 in the last seven minutes of the first half.  At halftime the score was 22-35.  The Lady Bulldogs were still in the game. Jaylan Snowden scored the first layup in the second half, cutting the Redhawks lead to just 11 points. Alabama A&M wasn’t able to get another bucket until six minutes later. They scored only 12 more points the remaining of the half. Brittany Strickland knocked down 10 points adding four rebounds. Brooke Dixon and Taylor Sippial chipped in six points apiece.

HOUSTON, Texas – The Lady Panthers didn’t have to travel very far to get kick off their season opener.  Prairie View A&M fell 58-70 to Rice University on Friday night.  Asha Hampton-Finch got things started when she knocked down a jumper at the 19:42 minute mark, with an assist from preseason player of the year, Jeanette Jackson. Jackson captured two early fouls within nine seconds, in the first four minutes of the game.  The score was tied four times in the first half.  Prairie View were only down by six points going into the second half.  The Lady Panthers allowed a layup just 10 seconds into the second half.  In the last seven minutes, Prairie found themselves trailing behind by 13 points.  They fought and battled hard to come back up but unfortunately the Rice’s offense could not be stopped.  Jackson led the way with 11 points, five assists, one steal and three rebounds.  Chelsey Rosier also chipped in 11 points and two rebounds.

NEW ORLEANS , La. – The Mississippi Valley State women’s basketball team played well early Friday night at Tulane, but a late push sent the Green Wave past the Devilettes, 87-47, to open the 2014-15 season at the Devlin Fieldhouse. Valley came back from an early 11-2 deficit using a pair of 3-pointers by Taylor Green and free throws by Ashley Beals and Chelsea Mabry. However, Tulane went on a 12-0 run before Ronisha Morris’ three-pointer at the 6:20 mark stopped a near five-minute drought for the Devilettes. The Green Wave led 38-24 at halftime. MVSU was unable to mount a comeback as the Green Wave made 40 percent of its shots in the second half compared to Valley’s 29.6 percent. Tulane outscored the Devilettes 49-23 in the final 20 minutes. Valley’s lone senior, A’Shanti Weathers, led the team with 10 points while Green chipped in nine. Meanwhile, sophomore Christina Reed added eight points and a team-high eight rebounds. Tulane took advantage of the Devilettes’ 32 turnovers in the game. Kolby Morgan had 16 points for the Green Wave.

JONESBORO, Ark. – The Lady Tigers basketball team drop season opener, 60-92, to Arkansas State in the first round of the Women’s National Invitation Tournament (WNIT) on Friday night. Jackson State junior forward Kaylan Hughes scored the first two points of the game but the Lady Tigers loss their footing and never regained a lead. During the first half of the game, the Lady Tigers struggle to keep up with Arkansas closing the half down 18-47. After the intermission, JSU appeared to rebound and regain focus scoring 42 points in the second half to Arkansas 45 but it just wasn’t enough. The Red Wolves were led by four double-digit scorers; junior guard Khadija Brown Haywood with 10 points, senior guard Hanna Qedan with 11 points, junior forward Amanda Lawson with 12 points, and junior guard Aundrea Gamble with 15 points. Despite the loss, the Lady Tigers recorded good individual numbers. Freshman guard Derica Wiggins led Jackson State with 23 points, 3 rebounds, and 1 assist. Junior forward Nyahok Bile held the game high of 9 rebounds and senior guard Ayanna Lynn aided the team with 3 assist.  Arkansas State held a higher field goal percentage of 52% to Jackson States 37% and dominated ball possession driving them to a 32 point victory over the Lady Tigers.