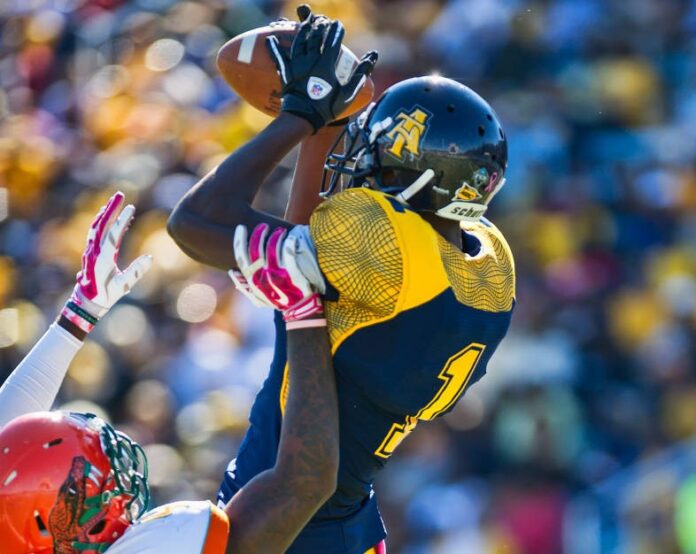 GREENSBORO – Homecoming wins always have a little extra weight to them. The alumni, student body and administration all walk out of the stadium with their chest poked out before partaking in a few more tailgates and the fun and festivities scheduled for the evening.

North Carolina A&T’s 40-21 homecoming win over Florida A&M Saturday afternoon at Aggie Stadium had a little more meaning than just giving the alumni something to be proud of, however. The win put the Aggies (7-2, 4-1 MEAC) in sole possession of first place in the MEAC with three games remaining on the Aggies’ schedule.

“Homecoming is different; look at the crowd and the atmosphere,” said Broadway. “You can feel it around here. It’s the Greatest Homecoming On Earth, and it is big. At (historically black colleges and universities) homecoming is always big, and it was a conference game. It took us to seven wins. I think this is the third year in a row we’ve had seven wins. That means we’re getting a little bit better every year.”

As the Aggies enter what will be a tough fight for the conference crown, they received some good news on Saturday when junior quarterback Kwashaun Quick walked out on the field as the starter. In his first game back after missing three weeks with a knee injury, Quick threw for 233 yards and three touchdowns on 16-for-26 passing.

“I was ready to get back out there,” said Quick. “It was eating me alive not to be out there with the boys. I’m back now and it’s time to move forward and get better from here.”

All three of his TD passes went to sophomore Denzel Keyes who used his 6-foot-4 frame against the smaller FAMU defensive backs to be effective most of the game before using his smarts for what may have been the biggest play of the afternoon.

With the Aggies leading 20-14 in the third quarter, the Aggies decided to take advantage of something they noticed throughout the first half. The FAMU defensive backs were keying on Quick’s movements. Whenever Quick motioned to throw, the Rattlers came forward to stop the short pass or run.

On a 2nd-and-4 from the Aggies 27-yard line, Keyes was scheduled to run an out pattern, but when he saw the corner come up on the Quick throwing motion, he continued to run downfield. Quick spotted Keyes running free down the sideline and connected with the Aggies forward from the men’s basketball team for a 73-yard touchdown and a 27-14 lead.

Keyes finished the day with a career-high 129 yards receiving on five catches.

“My hat goes off to Denzel Keyes, he had some big plays for us,” said Broadway. “That’s where we are developing as a football team. We are getting some pretty good athletes in here now. We are still about 14 short, but once we get 14 more we are going to improve a little bit. We have a few weapons we can go to right now.”

Keyes was not finished. He used his height to go over the top of 6-foot Devonte Johnson to end the third quarter with a 21-yard touchdown reception to give A&T a 33-14 lead after the extra point was blocked.

“He is 6-4. He is a basketball player, a football player and he can make those plays,” said Broadway.

Senior kicker Jose Garcia-Camacho helped the Aggies put the game away as his ensuing kickoff was perfectly placed at the FAMU 24 where no Rattlers were standing. Marlowe Wood swooped in and dove on the live ball to give A&T a 1st-and-10. Desmond Lawrence followed with a 21-yard gain on a reverse. Sophomore Tarik Cohen closed out the drive with a 3-yard TD run to open the fourth quarter.

“We try to tune it out and focus on the game…get our mind right,” said Quick about playing on homecoming. “(The fans) are here to watch us play and we’re here to give them a show. We preach about staying focused all the time. We can’t lose what homecoming is about. It’s about the fans and the alumni coming back, and it’s about us trying to win a football game.”

The Aggies may have had a few homecoming jitters to start. The Rattlers took their opening drive 75 yards on 11 plays as Lemond Bruice scored on an 11-yard touchdown pass from Damien Fleming. But the Aggies responded with 17 unanswered and led 20-14 at the half.

“We got a couple of guys banged up but to win this game during homecoming is big to the city, community and everybody else benefits from this, so we are extremely happy to have won this game.”

The Aggies will take a week off from competition before playing their home finale against one of the MEAC championship contenders, Morgan State, in two weeks (Nov. 8, 1 p.m.) at Aggie Stadium.