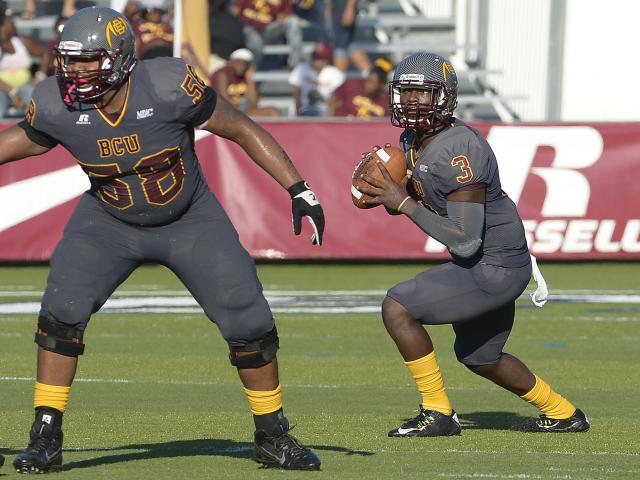 It’s rivalry week in the SWAC.

Alabama State and Alabama A&M will meet in Birmingham in the annual Magic City Classic.

Appears to be good eatin’ if you ask me.

Here is why so many folks love college football rivalries.

Only during Halloween are people allowed to be overtly sophomoric, engage in insults and be emotional without fear of being judged.

It’s like the movie The Purge. Only with less gore and no government involvement.

Additionally, a loss in a rivalry game could spell doom for the unsuccessful head coach. Throwing out the records does not apply.  Are you reading this Reggie Barlow?

Call me crazy (and Rihanna can call me, maybe) enough to believe that JSU can beat Southern. Even though Southern will be inserting bodies back into a defense that has been hampered by injuries for most of the season, Jackson State is leading the SWAC in passing. They just have problems sticking it in when it counts, though. Southern is gonna put up a fight in attempt to stay in the SWAC West.

Alabama State head coach Reggie Barlow has to win this game to save his job. A loss by the Hornets and you can kiss any hopes of surpassing Alcorn State good bye.  Alabama A&M has nothing to lose. First-year head coach James Spady is hopped up on Magic City Classic goof balls. He’s playing with house money. The Bulldogs are going to be loose, no doubt. However, Alabama State has just too much talent, and should win this game. Except if they don’t.

In what was supposed to be a preview of the SWAC championship game (In my mind), only one of the teams have a real shot at playing in Houston come December. Never gamble on college football players, kids.

The enigma that has been Prairie View rolls into this one riding a three-game winning streak after starting out the regular season 0-4.  Alcorn State, after suffering its first SWAC loss against Grambling State two weeks ago, bounced back nicely with a win over Texas Southern. The resolve of the Braves has been impressive all year long. It is why they’ll beat the Panthers.

Remember when the Rattlers were bad at football and there was talk about Earl Holmes being fired? Me neither. FAMU has gone 2-1 since starting 0-5. A win over North Carolina A&T could push them in to first in the MEAC. God is real. The Aggies have explosive playmakers the likes of Tarik Cohen and Desmond Lawrence who can make life miserable for opposing defenses.

B-CU has been the standard by which all teams in the MEAC have been judged this season. At 6-1, the Wildcats have been the best team in BCF without rival. South Carolina State, though, is no slouch either. The Bulldogs are going to try to overcome losing by double-digits to an improving North Carolina Central outfit a week ago.  In any other year, I’d say SCSU could knock off B-CU, but Brian Jenkins’ boys are just too good.