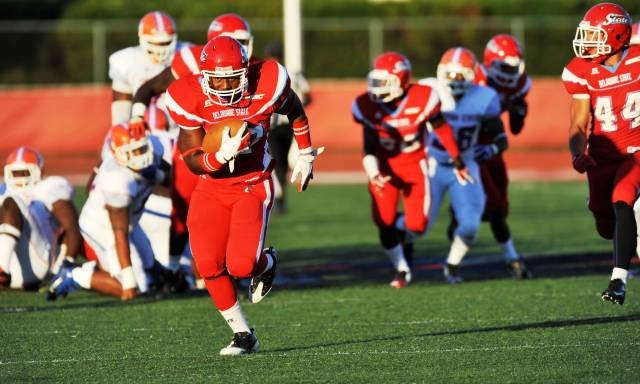 Dover, Del. — Delaware State scored four touchdowns in the first quarter, including three in a one-minute-14 second span, en route to a 35-10 win over Savannah State in the Mid-Eastern Athletic Conference opener for each team at Alumni Stadium this evening.

The school record for most points in a quarter is 30 in a 58-7 victory over Arkansas-Pine Bluff in 1988.

The Hornets scored their first touchdown on defense when linebacker Kareem Leaver stripped the ball from Savannah State running back Alex Simmons on a short run.

Leaver recovered the fumble and returned the ball 44 yards to the endzone for the first score of the game.

Mitchell Ward’s extra point kick gave the Hornets a 7-0 lead with 7:05 left in the first quarter.

It was Delaware State’s first defensive touchdown of the season.

The Hornets took advantage of good field position to score their second touchdown.

Starting at its own 46 yard line, Delaware State needed just seven plays to reach the endzone.

Reserve fullback Lamar Shaw capped off the drive with a 16-yard touchdown run on a fourth-down-and-one play. The other big play in the drive was a 32-yard pass from Gilbert Rivera to Aris Scott on third-down-and-13 to the Savannah State 25.

Ward’s extra point gave the Hornets a 14-0 lead with 2:52 remaining in the opening quarter. The touchdown was Shaw’s first of the season and third of his career.

Two plays after Terrick Colston forced and recovered a fumble at the SSU 10, Rivera found wide receiver Malik Golson in the endzone for a five-yard touchdown pass. It was Golson’s second TD catch of the season.

The score gave the Hornets a 20-0 lead with 2:00 left in the first quarter. The extra point kick by Ward was unsuccessful.

Savannah fumbled the ball away again on its next possession.

On the next play from scrimmage, wide receiver Milton Williams III scored on a 44-yard catch and run for the Hornets’ third touchdown in a span of 74 seconds.

A two-point run by Nagee Jackson after the touchdown gave the Hornets a 28-0 lead with 1:38 left in the opening quarter.

Savannah State kept the Hornets off the board for the next two quarters, while scoring a touchdown in the second quarter and adding a field goal in the fourth to pull to within 28-10.

The Hornets closed out the scoring on their final possession of the game. The five-play, 59-yard drive was capped off by an 18-yard touchdown pass from reserve quarterback Marlon Kelly to Williams III with 1:00 left to play.

Running back Nagee Jackson had 56 yards rushing on four carries, including a career-best 39-yard run, during the drive.

The Hornets rushed for a season-high 204 yards in the contest, their most since posting 221 vs. Hampton in 2012.

Malcolm Williams led the way with 89 yards rushing on 21 attempts, while Jackson tallied 60 yards on eight tries. Shaw chipped in with 37 yards on just three carries.

Kelly entered the game when Rivera suffered a knee injury in the second quarter.

Colston tied for game-high honors with nine tackles, including seven unassisted. He also had an interception, a forced fumble and fumble recovery in the contest.

The Hornets had a season-high six sacks in the game. Linemen Rodney Gunter and Gabe Sherrod had 2.5 sacks each.