Norfolk State Gets First Win Of The Year Over Morgan State 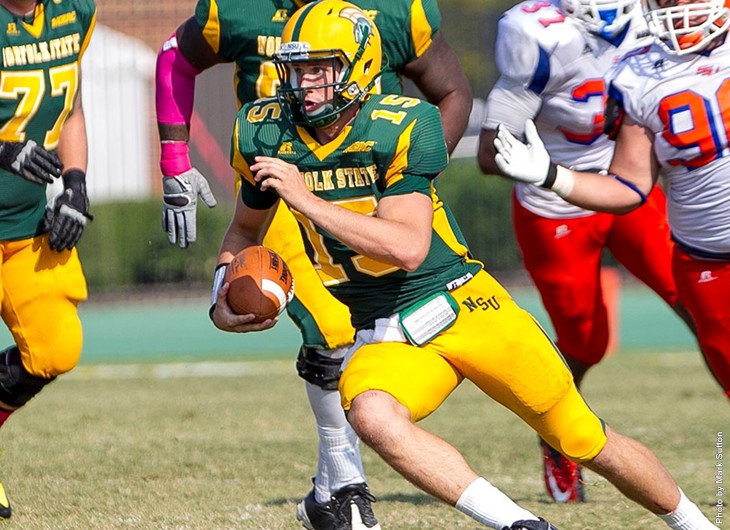 The win snapped NSU’s six-game losing skid dating to last season and was the eighth consecutive victory for the Spartans (1-4, 1-0 MEAC) over the Bears (2-3, 1-1).

NSU seemed in control for much of the night in this defensive slugfest. The Spartans entered the fourth quarter leading 9-0 on the strength of a career-high three Cameron Marouf field goals, two in the second quarter and one in the third. But the Bears got on the board on a 23-yard touchdown run by Orlando Johnson on the first play of the fourth quarter, which punctuated an 82-yard drive that included three 15-yard penalties against NSU.

After the Bears forced NSU to punt, MSU went to work again, driving 65 yards in nine plays, all runs. Herb Walker capped it with a 5-yard TD run that gave the Bears a 14-9 lead with 8:28 remaining.

Things looked bleak for NSU after the Spartans’ next drive stalled after four plays and ended in another punt. But after a key 51-yard punt by Dylan Shaddix moved MSU deep into its own end, the NSU defense came up big, forcing a three-and-out.

A 13-yard punt return by Eric Pittman gave the Spartans possession of their final drive at the Bears’ 49 with 4:55 left. After two sacks to start the drive, Terrance Ervin hit Isaac White for 17 yards on 3rd-and-15 to get NSU moving. Terry Polk had a 5-yard run on a 3rd-and-5 later in the possession to give NSU another first down, then Riddick burst up the middle for five yards on 4th-and-1 from the 18 on the next set of downs.

Two Bears penalties – a substitution infraction and a pass interference in the end zone – put NSU at the MSU 3. Clark ran for two yards on first down and then bulled into the end zone for the go-ahead score on second down.

MSU took over its last drive at its own 35. Bears’ quarterback Robert Council threw incomplete on four straight plays, including a pair of pass breakups by safety Brandon Walker.

Marouf was key for NSU, connecting on kicks of 43 and 26 yards in the second quarter and a 44-yarder in the third. He made two field goals in a game three times previously, but had never made two of over 40 yards in the same game. Shaddix averaged 44.2 yards on five punts to complete a solid day for NSU’s kickers.

Pittman led NSU with 16 carries for 81 yards in his second game in a Spartan uniform. Riddick rushed for 64 yards and Ervin had 48 for NSU, which ran for a season-best 238 yards.

The Spartans look to maintain their winning ways next Saturday when they face Savannah State in Savannah, Ga., at 2 p.m.