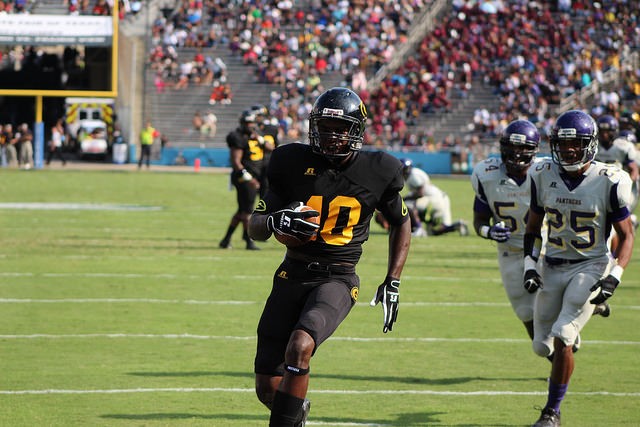 The Panthers scored the game’s first touchdown on their second drive as Jerry Lovelocke rushed in from one yard out at the 10:17 mark of the first quarter. The PAT by Chris Barrick was good as the Panthers led 7-0.

After a series of punts, Grambling State responded with an 11-play, 68-yard drive to knot the contest at 7-all following the PAT late in the first quarter. However, the Panthers went right back to work on the offensive end at the close of the quarter as backup quarterback Trey Green came in and led the team on an 11-play, 63-yaard drive which culminated with redshirt freshman Jovante Ham’s 4-yard touchdown.

Both teams traded punts midway through the second stanza and Grambling State tied it at 14-all thanks to a series of big plays to move them into scoring position. Backup quarterback Johnathan Williams found Verlon Hunter for a 32-yard touchdown pass on the drive for the tie game. PVAMU didn’t waste any time on the ensuing drive as Green led the Panthers back into the red zone. However, the drive stalled and the Panthers had to settle for a 35-yard Chris Barrick field goal with 4:47 left.

Williams marched down the field on the next drive but like the last drive by PVAMU, the Tigers stalled in the red zone and knotted the contest at 17-all after a 29-yard field goal from Mark Orozco. The Panthers raced down the gridiron and closed out the half ahead 20-17 after Barrick’s 42-yard field goal hit the uprights successfully.

The Panthers fumbled on their opening drive of the second half and GSU took advantage with a 24-yard field goal to knot the game at 20-all. Despite a 62-yard rush from freshman Arthur Lockett to open PVAMU’s second drive, the Panthers failed to capitalize as they came up short in the red zone on both offense and special teams as they missed a 34-yard field goal.

The Tigers went to the run game and found a groove as they rushed for 54 yards coupled with a big pass play to set up another scoring drive. Juwan Martin rushed in from eight yards out to move GSU ahead 26-20 as the Panthers held serve by stopping the two-point conversion.

From that point, the defenses ruled the field as there were a combined four punts with the Panthers receiving the ball with 3:10 remaining. The Panthers moved down the field quickly and avoided a fourth down hiccup as Lovelocke found Johnta’ Hebert for a nifty nine-yard conversion on a 4th-and-7 at the PVAMU 44. Lovelocke found Rayshawn Givins for a 13-yard reception on the next play and the Panthers hit paydirt as Greg Thurmond caught a 19-yard pass to move the Panthers to the GSU 24.

However, things went south as Lovelocke had three incomplete passes with the final play of the possession resulting in a sack.

PVAMU had 400 yards (271 P, 129 R) of total offense while surrendering 485 yards. Lovelocke passed for 239 yards on 23-of-39 passing while Thurmond caught 10 receptions for 85 yards. Senior Jerome Howard finished with 17 tackles while Danny Brownell had 13 tackles with two tackles for loss.

The Panthers return to action next week in Jackson, Miss. as they’ll face Jackson State at 6 p.m.