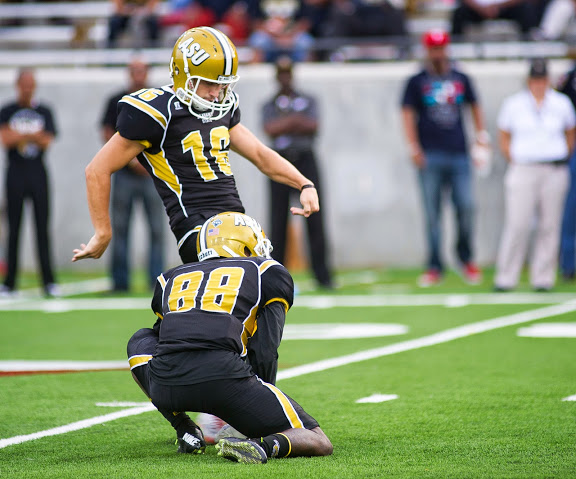 The Hornets picked up their fourth win of the season with a 38-3 blowout win over Texas Southern led by a stingy defense.


“I think Coach (Kevin) Ramsey and the defensive staff is doing a good job of continuing to develop our guys, our starters and those back up guys are playing meaningful time,” Head Coach Reggie Barlow said. “Coach Ramsey coached a lot of those guys and recruited a lot of them and he kind of new what the can and can’t do. I thought he had an outstanding game plan together to force them to get the ball out of their hands (quarterbacks) quick.”

Barlow added, “We were really worried about them running around, but our guys did a good job of sustaining and containing the edge. We were able to get some sacks and some turnovers and our defense really played combative and that’s exactly how you want to play it.”

In knocking the Tigers from the ranks of the undefeated, the Hornets held the dangerous passing game of TSU to only 99 yards passing on 12 of 31. ASU had one pick and sacked the TSU quarterbacks on six times.

Daerius Washington led ASU with 10 total stops (5 solo) while Kourtney Berry had nine (eight solo). Washington had two of the team’s six sacks while Berry added a sack and 1.5 tackles for lost yardage.

Torrey Davis continues to have a solid season, finishing with seven tackles, a sack, two tackles behind the line of scrimmage and forcing two fumbles.

Senior Marcus Berg had his second interception of the season while Edward Mosley and Darien Barrett each had fumble recoveries.

Malcolm Cyrus continued to pile up the yards finished with a game-high 118 yards. He only carried the ball 16 times, and only twice in the third quarter as ASU played four other running backs in the second half.

Quarterback Daniel Duhart had a solid performance rushing for a career-high 63 yards and a single-game and career-high two touchdowns, one from 25 yards out and his final score from three yards. He also completed 18 of his 32 pass attempts for 209 yards, including a 40 yard touchdown pass to DeMario Bell.

“Offensively Coach (Fred) Kaiss and his offensive staff are getting the guys prepared and the players are buying into that philosophy and they are going out and playing with a lot of passion,” Barlow said.

Of all the big numbers from the Hornets, none were bigger than the freshman Clark. His five field goals was a career-high and now gives him 10 on the season. He also had a solid outing punting the football, averaging 39.5 yards per punt, including a career-long 54 yarder. Two of his four punts were downed inside the 20 and none of them were returned.

“Tonight I had the five-for-five and I actually struggled in practice this week,” Clark said. “Tonight I came out and stuck to my technique and did my thing out there and came through with it.”

ASU did most of their offensive damage in the opening half as the full starters only played two series in the third quarter. ASU did manage to score a safety when Deontrelle Silmon tackled a TSU quarterback in the endzone after a Clark punt had been downed on the one yard line.

The other scores came on Clark’s fifth field goal of the game and Duhart’s final touchdown run to push the final advantage out to 38-3. The Hornets defense held TSU scoreless in the second half.

The first half was all ASU as the Hornets rolled up 314 yards in building a 26-3 lead. ASU ran 48 first-half plays while scoring on each of its six possessions.

Most of the scoring came off the foot of Clark who kicked four of his five field goals. He hit from 18, 31, 29 and the final from 31 yards out on the final play of the half.

The other scores came on a Duhart 25-yard run and a 40-yard pass to Bell in the endzone. Bell was able to out jump two Tiger defenders in the scoring play.

ASU’s defense held the high-scoring Tigers to only 115 total yards and three points on a Eric Medina 29 yard field goal in the second quarter.

Barlow added, “This was a really good game. Obviously there are some things we have to clean up, but it was a solid performance by our guys.

The Hornets will once again have a short week as they will travel to Alcorn State for a Thursday night ESPNU broadcast game. The game is scheduled to kick off at 6:30 p.m. Both teams enter the game undefeated in the East Division. The game will be ASU’s fourth game in 20 days.

“I don’t know if I have ever played that many games in that few of days,” Barlow said. “We just have to have a good plan. We don’t have a lot of time to prepare for Alcorn and you never want to look past an opponent like a Texas Southern, so we have figured out how we are going to practice, and we only have two days really.”

“We have to let these guys heal, and get treatment, and we have to make sure we are doing study hall. Then Monday get a practice in and Tuesday another one in and Wednesday we will be traveling out. It’s a huge challenge for us next week. We have a lot of respect for Alcorn and Coach Hopson and those guys are doing a great job and playing lights out.”