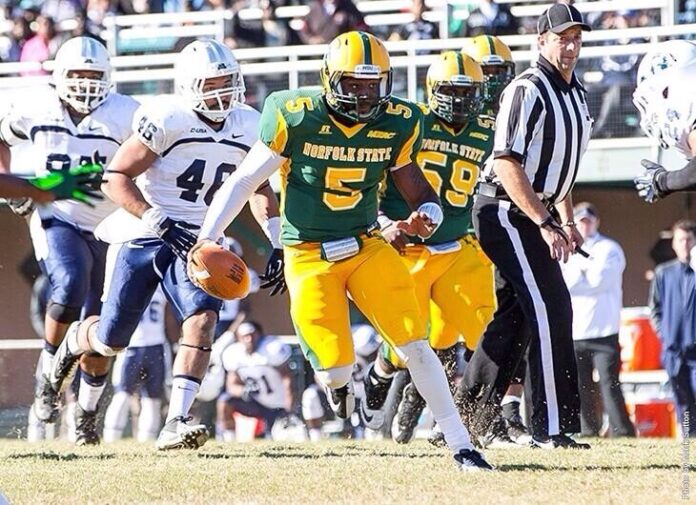 BUFFALO, N.Y. – Buffalo quarterback Joe Licata passed for 229 yards and three touchdowns and ran for another score to propel the host Bulls to a 36-7 win over Norfolk State on Saturday at UB Stadium.

Anthone Taylor rushed for 116 yards for Buffalo (2-2), which dealt the Spartans (0-4) their sixth straight loss dating to last season and ninth straight in non-conference games. NSU also dropped to 0-7 all-time in games against Division I FBS competition.

Both teams struck for big plays early. After the teams traded punts to start the game, Licata found Devon Hughes on a 92-yard catch-and-run scoring play on the first plays of the Bulls’ second drive to open the scoring. But the Spartans answered on the next play from scrimmage. Freshman quarterback Terrance Ervin hit Isaac White on a deep post pattern, which White turned into a 68-yard TD pass to tie the game. The score was the first TD pass in Ervin’s career and the first scoring reception in White’s.

The relentless Bulls kept coming. Licata directed an 11-play, 75-yard scoring drive which he capped with a 9-yard TD pass to Hughes. The extra point put UB ahead 14-7 with 5:01 left in the first quarter. Licata completed a 35-yard pass to Ron Willoughby on 3rd-and-18 to keep the drive alive.

A special teams miscue set up Licata’s third TD pass of the day. A low punt snap into a strong wind prevented NSU punter Dylan Shaddix from attempting the boot with 8:48 left in the second quarter. The Bulls took over at the Spartans’ 19, and four plays later, Licata hit Willoughby for a 3-yard TD pass. The conversion try failed, keeping the score 20-7.

Leading 23-7 entering the quarter, Buffalo used a 27-yard Marcus McGill punt return to set up its next touchdown, a 1-yard Licata sneak that made it 29-7 with 7:01 remaining in the third quarter.

UB padded its lead to 36-7 on a 17-yard TD pass from backup quarterback Tony Daniel to Willoughby with 9:40 left in the game.

Hughes caught five passes for 120 yards and Willoughby had four for 64 for the Bulls, who outgained the Spartans 431-215. Both caught a pair of touchdown passes.

Ervin was 3-of-12 for 99 yards and a TD for the Spartans and also led the team with 26 rushing yards. White had 79 yards receiving on two receptions.

Marcell Coke tallied a game-high 12 tackles for NSU. Lamar Neal and Lynden Trail had eight apiece, with Trail also recording a sack. Brandon Walker made seven stops, one for a loss, and added a pass breakup.