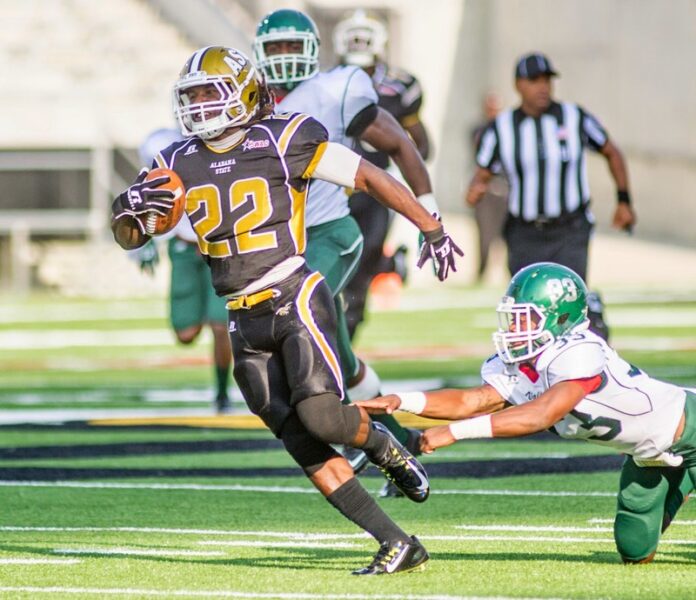 Alabama State running back Malcolm Cyrus is the best running back in the FCS, and maybe in all of Alabama with apologies to the 5-star battering rams who tote the rock for the football enterprises that are the  Crimson Tide and Auburn.

Talk about a lifeless bunch. UAPB might be the most nondescript outfit in the SWAC right now.  They bring nothing to the table. No fans. No excitement. Few touchdowns.  They’re boring and bad.

Saturday marks nearly a year since the entire Grambling State football team decided to hold two schools hostage — Jackson State and Grambling — in exchange for a truck load of protein shakes and new coach. They got both but are still faaaaaaaaaar from being your big brother’s Grambling. At o-3, that program will have a nice comfortable spot at the bottom of the SWAC West this season.

Grambling State vs. Jackson State: Grambling is going to get on the bus this time, but they will regret getting off.

Southern vs, Prairie View: This was supposed to be the game of the year in the SWAC West. Both teams are fighting to be average. Southern might not have enough bodies to put up much of a fight.

Hampton vs. Miles: Connell Maynor can’t lose this one, right?

Howard vs. Morgan State: Howard QB Greg McGhee played the game of his life against a pushover in Morehouse last week. He will repeat that performance against another one.