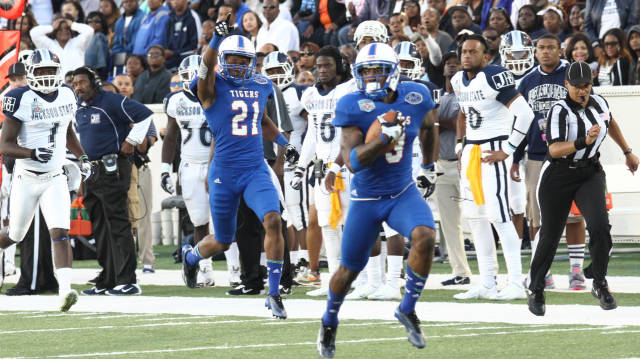 MEMPHIS, Tenn. – A fast start propelled the Tennessee State football team to a, 35-7, victory over Jackson State in the 25th annual Southern Heritage Classic in front of 46,914 spectators.

The TSU offense played its finest football of the young season in the first half, totaling all of its 35 points.

Tom Smith, who was named the game’s Offensive MVP, anchored an offense that racked up 189 yards in the first 30 minutes. The junior transfer totaled 48 yards on only seven carries and scored twice – once to start the game from two-yards out and had the final score of the half from 13 yards away.

Sophomore quarterback Ronald Butler took over for Mike German with 13 minutes left in the second quarter and he quickly found Dantwaun O’Neal on crossing pattern for a 13-yard touchdown to give Tennessee State a 28-0 lead.

The TSU defense was strong as well during the first two periods, only allowing 21 yards of total offense, 0.7 yards per play and one first down.

Senior cornerback De’Ante Saunders had two interceptions in the first half and ran the first one back 45 yards for a touchdown when TSU was up by just two scores.

Tennessee State was content to sit on its lead in the second half and only managed 135 yards and did not score again.

Jackson State, meanwhile, finally found the end zone once with 2:44 left in the third quarter with a four-yard touchdown run.

The TSU defense held JSU to minus-one yard rushing, a one-for-16 line on third down tries and recorded seven sacks.