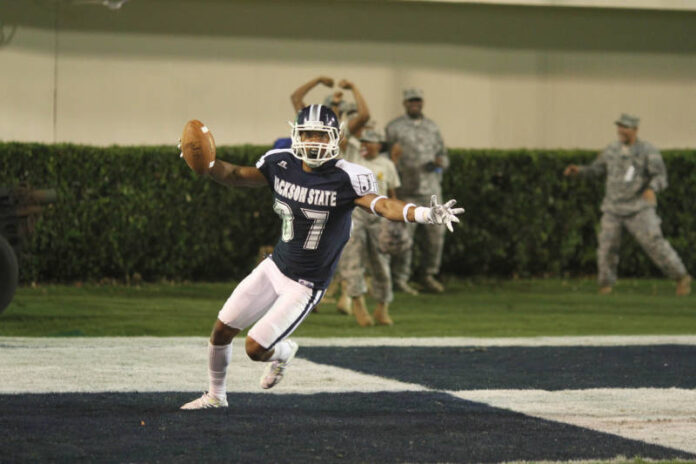 Jackson State wide receiver DeSean McKenzie wasn’t supposed to be the primary receiver on what turned out to be his game-winning touchdown catch in the final second that sealed a miraculous 22-17 win over Florida A&M Saturday.

According to McKenzie, he was supposed to be the first wide receiver camped near the end zone as LaMontiez Ivy flung the Hail Mary pass. However, his first job was to deflect, not catch the ball.

Instead, he ended up being a hero.

Prior to their matchup with Sun Belt foe Texas State, Arkansas Pine-Bluff was almost dismissive about the prospect of playing against who they thought was a lowly opponent.

“Because they are FBS, we will give them the respect we need to, Coleman told the Pine-Bluff Commercial. “But judging from the film and hearsay, they’re maybe not as talented as Arkansas State.”

Linebacker Antonio Jenkins said the defense was good enough to hold Texas State to a mere two touchdown. Some 697 total yards, 39 first downs and 65 points later, UAPB suffered its worse loss in the Coleman era.  How bad was it for the Golden Lions? Quarterback Benjamin Anderson averaged more yards per carry (4.8) than he did per pass (4.0).

“I thought we were ready, Coleman said. “I thought we would have played a little bit better. But we made way too many mental mistakes to any football game against anybody.”

That might not have been as embarrassing as FIU losing to Bethune-Cookman 14-12 after failing to cleanly execute a field goal that would have won the game in the final seconds Saturday.

It was B-CU’s second straight win over FIU in as many years.

“This game could have gone either way,” head coach Brian Jenkins said. “It just so happens we came out on top.”

The Hornets, picked by many to win the SWAC East, gave up 685 yards to Sam Houston State. To say Barlow was disappointed is an understatement.

“Our secondary, there has to be some shakeup. It’s been an issue of ours. At the cornerback position, you have to be a confident player, you have to be a guy with a short memory. You can’t be off the ball 15 yards, 18 yards. You have to have instincts to know down and distance. We wanted to see if Nagee Bright could play corner, Marcus Berg, to see where he was. We saw. As a secondary unit, we weren’t very good today.”

The biggest takeaway from Southern’s loss to Louisiana-Lafayette wasn’t the game itself. It was what transpired hours prior to kickoff.

According to an article published in The Advocate, Southern arrived at Cajun Field 45 minutes before kickoff because school officials were frantically trying to determine which players were academically eligible to participate in the game.

The uncertified players were withheld from play to avoid potential sanctions if they are ultimately deemed academically ineligible. It’s unclear when their long-term status will be determined.

The youth served the Aggies well in their 41-13 win over the Bulldogs. The MEAC is now 8-2 in the 10 matchups against the SWAC.

QUOTE OF THE WEEK:“It was my fault,” Florida A&M defensive back Terry Johnson said, tears welling up in his eyes. “I was trying to make the play but I was too far in front of the ball. He overthrew my head by an inch or two. It just went through my hands.”