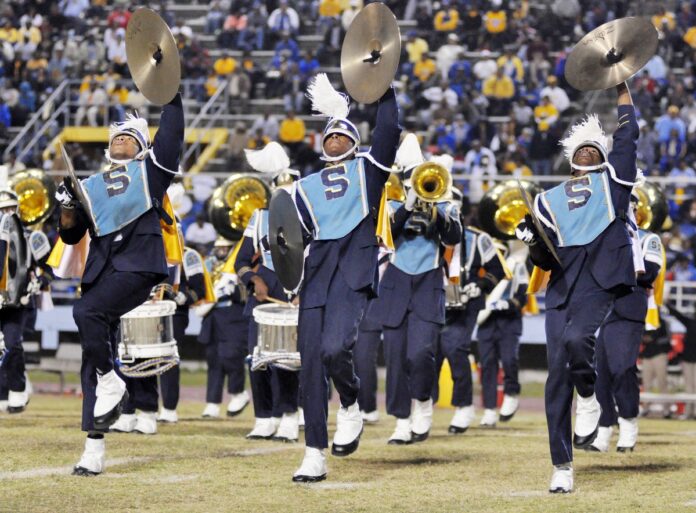 BATON ROUGE, La. – During a practice session this week, Interim Director Nate Haymer told Southern University marching band, “You don’t get a second chance to be perfect. You have to be perfect the first time.”

Nightfall had come Wednesday as the band – the newest version of world famous “Human Jukebox” – prepared for it first performance under Haymer’s direction. He was energized and the more than 200 band members were taking their cues from the young director.

“Get those legs up…trombones you have to do better,” he said to them over the stadium’s speakers. Over and over, Haymer made the band go through its paces and each time he demanded perfection.

It’s Haymer time. His staff ranges in age from 22 to 34 and may be the youngest college band staff in America.

Haymer, named interim band director this summer after the retirement of Lawrence Jackson, says his group might be young, but they’re ready. Their first show is Saturday, Aug. 30, at University of Louisiana’s Cajun Field.

Five years ago, the band performed a halftime show there for the ages – a tribute to the late superstar Michael Jackson. The Jukebox left the field to a standing ovation before a record crowd of 41,357 at Cajun Field.

Southern’s march toward legendary status began in the 1960s under the leadership of Dr. Ludwig Freeman. The Human Jukebox then burst on the national scene under the direction of the late Isaac Gregg. His protégé, Lawrence Jackson, continued the band’s national and international recognition.

During those years, the band has played at Radio Music Hall, at presidential inaugurations, was voted by USA Today as the best college marching band in the U.S., and has played at Super bowls and Sugar Bowls.

The New York Times published a profile suggesting that Southern and Ohio State University were the two top college marching bands in the country. Last year, the band was featured in the Jonas Brothers video, “Pom Poms.”

The band was recently named HBCU Band of Year for the second time by HBCU Digest.

Haymer, a Southern grad and member of the Human Jukebox, has a staff of all former “Jukes” and SU graduates. Lorenzo Hart, 34, is the percussion instructor. Kedric Taylor, 30, is an assistant director and Brian Simmons, 22, is an assistant band director.

“I have complete faith in all of these young men. They are professionals who are dedicated to making our band better,” he said. “They take pride in being graduates of Southern and in continuing the tradition of our band.”

The band held a major practice on Wednesday night, going through its whole halftime show at least four times. There were a few hiccups.

“Watch your angles…You have to be better,” Haymer urged the group. “You have to come out faster…There’s no excuse for what you’re doing.”

Morgan said he was in high school when the SU band performed at Cajun Field and “I watched it more than a dozen times on YouTube. I knew I wanted to be in Southern’s band, but it really sold me on Southern.”

Haymer, a tireless worker, already has completed the largest band camp in the history of the university. The number, around 400 high school students, nearly doubled the record number set in 2013.

“More and more young people are gravitating toward our band and what we do. They see us on television and on YouTube and they like what they see,” he said.

One of the most watched Jukebox videos is the 2009 Michael Jackson show performed at halftime of the Southern – University of Louisiana Lafayette contest. There have been more than 300,000 views of the show.

Haymer and his young bunch said they hope to deliver more of those exciting shows with a slightly different flavor. Don’t worry, Haymer said, there won’t be any changes in the traditions that have made the band great.

As the band was completing its practice Wednesday night, Haymer passed by and said, “Not too bad. We’re going to be alright.”