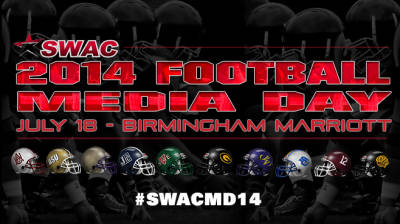 SWAC Media Day was filled with nuggets of good information,  interesting quotes and insight from coaches and players as they look ahead to the 2014 season.

Here are some notable stories from around the SWAC a day after a frenzied media day session.

This is crystal clear now. Jackson brought LaMontiez Ivy to media day, which was evident of his expectations for the sophomore quarterback. Jackson said the starting job is Ivy’s to lose this fall. That comes after a spring season in which Evan Ingram, last season’s backup quarterback, was making his case for the position.

James Spady talks about Alabama A&M being picked last in the SWAC East.

“As you can see from that list,” Spady began, “we’re not going to be very good. What we’re doing is we’re trying to build a championship team that can be sustained over the course of time.”

Southern will be the hunted in 2014

“I think that’s a good thing. Every team would want to have that problem,” Odums said. “We’ll be ready to handle it. We’ll get our mindset to a point where being targeted doesn’t faze us.”

Since returning to Grambling from a one-year stint as tight ends coach at McNeese State, Fobbs has tried to preach a positive outlook as he prepares his Tigers to begin what will be an arduous climb.

“When you start running, the first mile is the hardest one,” Fobbs said. “After that it’s easier to do. Our mindset is we want to be great. We’ll take care of the little things first.”

Alcorn State among the favorites in SWAC East

“A lot of times when you finish strong, a lot of people will think it will carry over to next season,” head coach  Jay Hopson said. “But these guys (the players) know that they still have to go out and prepare for this year.”

All or nothing for Prairie View in 2014

“If we go 9-1 and don’t win the championship, I don’t think anyone will be happy,” head coach Heishma Northern said.  “They will (players) see it Monday that they were picked second.”

A lot of people are caught up in height, but the game is going toward mobile quarterbacks, coach Darrell Asberry said.

“It shows the attitude Ben has to be nominated as the SWAC Offensive Player of the Year two years in a row, Monte Coleman said. “It shows how his offensive line, the running backs and the whole offense has promoted him to those honors.”

Comegy moving on after JSU