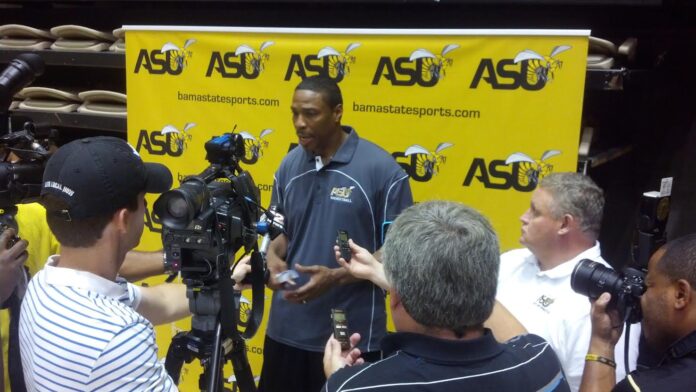 NASSAU, Bahamas—The Alabama State University men’s basketball team will be one of 14 NCAA programs to play in the “Summer of Thunder 2014” Tournament held in Nassau.  There are 13 international teams from the Dominican Republic, France and Puerto Rico during the foreign tour which is being hosted by the Bahamas Basketball Federation and Complete Sports Management August 2-25.

“We’re very excited and it is a great opportunity to go out and get some play in for the summer,” Head Coach Lewis Jackson said.  “We want to go out and have some fun and let the kids enjoy themselves, have a good time, play some basketball and it also gives us some time to get some practice in.”


“We are looking forward to the trip and want to make it fun, but at the same time we are looking to jell and try to come together as a team.”

The foreign tour will run over the course of 23 days with the Hornets scheduled to play their exhibition games during the second week of action.  ASU will leave for the Bahamas Aug. 12 and return Aug. 17.  They are scheduled to open play against the Providence Storm on Wednesday, Aug. 13 at 6 p.m.

On Thursday Aug. 14, ASU will play the Pyramid Food Rockets at 8 p.m.  The Hornets final exhibition game will have them facing the Street Legends All-Stars on Friday Aug. 15 at 8 p.m.  All games will be played at the 2,500-seat Sir Kendal Isaacs National Gymnasium in Nassau.

“We are going to get the chance to play some older guys who have played the game and understand the game and play at a high level,” Jackson said.  “It is a great opportunity for us because we were so young last year and these guys will have a chance to go out and see how much they have improved over the summer before we get into seasonal play.”

“I think this is the first time we at Alabama State have had an opportunity to go over and play (in the Bahamas),” Jackson said.  “Again, we want to see how much our guys have improved, but we want them to have a good time.  Some of these guys would not have this opportunity if it were not for basketball to go and make this trip.  So we are excited about what it can bring to us.”

“We are planning on taking in some sights.  I think we play late games so we want the guys to get out and have a real good experience.  We are going to try and blend in some tour time as well as getting in some time to play basketball.  It is going to be a fun trip for everyone.”

ASU returns every player from last season’s 19-13 team which finished tied for second in the Southwestern Athletic Conference with a 12-6 conference record.