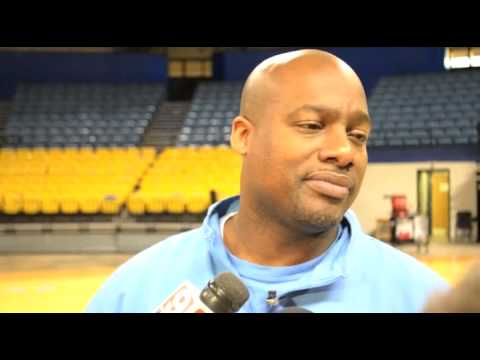 Southern University men’s basketball coach Roman Banks met with the media on Thursday after learning of the NCAA’s announcement that none of the institution’s athletic programs would be eligible for postseason play.

For Banks, the news comes near the completion of the regular season with the Jaguars needing a win against Alcorn State Saturday night to clinch the SWAC regular season title outright. During the media session he expressed how disappointing it was for his team to know that the possibility of another NCAA tournament appearance this year is no longer obtainable.


“It’s hard right now.   A lot of tears, everyone is kind of just numb right now.  I don’t know the correct words to say to lift them up, but I apologized.  When you have a group of guys that believe in you, believe in what you’re all about, and believing in the university in some type of way…it doesn’t turn out the way they’d like it to…and it’s out of their control, then you can’t help but to feel kind of down and hurt.

Banks on how the news has impacted him personally:

“It’s tough right now. Coming in we have had a great run.  We’ve been fortunate and blessed and then you kind of get another setback and you keep getting up again. But we’re going to fight and we’re going to represent the university the best we can.”

A reporter asked Banks about the timing of the news after clinching a share of the SWAC title.

“You know the timing is bad and then I don’t never know if there would ever be a right time.  We have to take this information.  We have to digest it.  This team has been relentless.  We’ve been able to bounce back quite a bit.  I think this is probably the lowest that they have felt by exactly knowing that they can’t get into post season play.  There was always a hope.  And when that hope is gone it takes you to re-energize yourself again.  We’re going to try our best to get past this very quickly and try to focus for our next basketball game on Saturday.  We’ve been up and down all season long with news and we think that we can handle it very well.”

Below is complete video of Banks’ response to the NCAA ban.