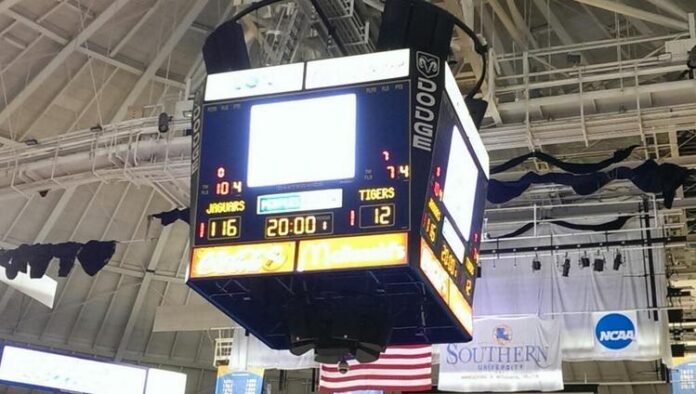 The Southern basketball team made national headlines last season when as a No.16 seed they nearly knocked off No. 1 Gonzaga in the opening round of the NCAA tournament.

ESPN college basketball analyst Dick Vitale recognized the Jaguars gutsy effort as one of the “top moments on the road to the Final Four.”


It was a watershed moment for a program two years removed from a 4-26 campaign that mercifully ended with an 11-game losing streak.

On Monday night, Southern made national headlines by playing the role of Goliath in defeating tiny Champion Baptist College 116-12.

Southern (4-9) started the game on a mere 44-0 run before Champion Baptist scored. It was an NCAA record.

The Jaguars broke the all-divisions record that used to be held by Seton Hall, which scored the first 34 points against Kean College on Nov. 19, 1998. They did not set a record for margin of victory. Long Island University beat Medgar Evers 179-62 on Nov. 26, 1997.

Only in hoops video games on the rookie mode difficulty setting is something like that even imaginable.

“It wasn’t about the opponent,” Southern coach Roman Banks told The Advocate after the game. “We’ve been playing a very tough schedule, we need to correct some things, and we had a game plan going in. The guys really stayed focused to that.”