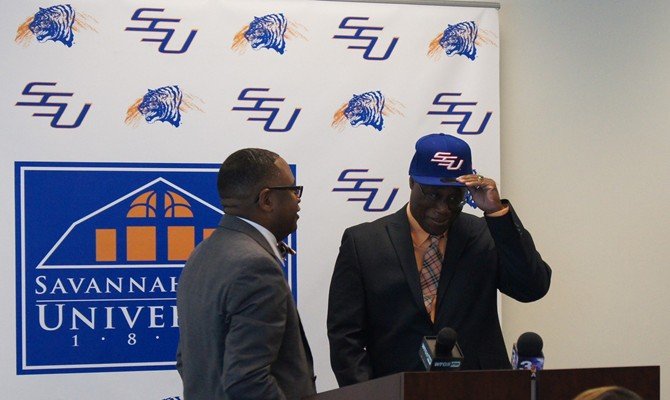 
The coaching veteran of 23 seasons becomes the 24th head coach of the Tigers since the football program started in 1915. A native of Columbus, Ohio, Wilson replaces Steve Davenport who served as SSU head coach for the past two seasons.

Wilson, 48, comes to Savannah State from fellow Mid-Eastern Athletic Conference (MEAC) member Hampton University where he spent the past year as the Pirates offensive coordinator and quarterback coach. Under Wilson, Hampton averaged 317.2 yards of total offense and 21.7 points per game.

Prior to JSU, Wilson served as the running backs coach at New Mexico State (2005-09) and before that was the offensive coordinator at Benedict (2003-04) for two seasons.

Wilson’s coaching background includes a stint as the head coach and director of football operations for the Carolina Rhinos (2001-02) and Jacksonville Tomcats (1999-2001) of Arena League Football 2 (AFL2). In his first season as head coach in 2000, the Rhinos posted a 10-8 record. The next year, Wilson led the Rhinos to a 13-5 record and advanced to the second round of the playoffs. Wilson took over at Jacksonville in 2002, leading the Tomcats to an 8-8 record.

Wilson played football while receiving both his undergraduate and graduate degrees from Texas Tech University. He earned a Bachelor of Science degree in Recreation in 1989 and a Master of Education degree in Sports Administration in 1990.

Wilson is married to Maria, and the couple have three children: Earnest, IV, Jonathan, and Mya.