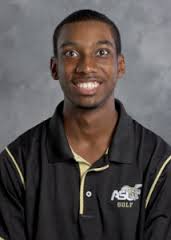 PORT ST. LUCIE, Fla. – Robert Grant eagled the 18th hole to force a playoff, and then birdied the  first playoff hole to win the individual competition on the final day of the PGA Minority Championship presented by Brown Capital Management.

In team play, the Hornets finished in third place, 12 shots behind winner Bethune-Cookman and 11 shots behind second-place Texas Pan American.

“Our effort was good enough, though we didn’t play our best which we needed to do to win,” assistant coach Robert Clark said. “I am extremely proud of our young men. They represented themselves and ASU proudly.”

Clark holed out on his second shot from 133 yards on the par 4 18th to force a three-way playoff. Playing 18 again, he hit his approach shot two feet from the cup to tap in for the one-stroke win over Justin Watkins of Central Oklahoma and Daniel Inocencio of UNLV.

“I absolutely pured the shot from 133 yards and saw it hit the flag. Then I saw my teammates go crazy and I knew it was in,” said Grant, who shot a final round 1-over 73 and finished with a 5-over total of 221. “Then, to hit another great shot in the playoff was just incredible. This event is our National Championship, and it’s so great to win it.”

Grant won the title in his first time playing in the individual competition for the Alabama State.

In team play, the Hornets couldn’t close the gap in the final round, as ASU posted a 301 score for the second time in three days. Branson Ferrier shot his second straight 2-under par round of 70 on Sunday, and finished with a 2-under total of 214 to finish second individually among team competitors.

“Robert, along with Branson’s performance, represents what elite athletes strive for – to play in the state of flow known as ‘The Zone,’” head coach Dr. Gary Grandison said. “Robert’s performance should provide significant television coverage for our University.”

The 2013 PGA Minority Collegiate Golf Championship presented by Brown Capital Management highlight show will air on Wednesday, July 3 at 8 p.m. on Golf Channel. Additional re-air times are Tuesday, July 9 at 1 p.m., and Tuesday, July 23 at 1 p.m. All times are central.

The back-to-back SWAC Champions will get set to play in the NCAA Tournament regional round this Thursday-Saturday in Fayetteville, Arkansas.