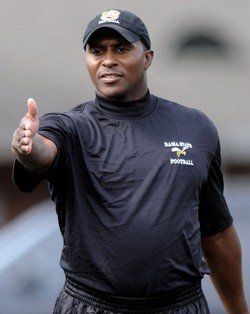 Amidst the off-season controversies compiled with a disappointing finish to the 2012 football season, Alabama State head football coach Reggie Barlow is very optimistic heading into the 2013 season.

Barlow has the Hornets buying into his One Team One Dream concept and the atmosphere around the program still holds true to the motto, It’s a Great Time to be a Hornet.


I caught up with Barlow, as he prepares for spring camps, to discuss this upcoming season and some of the changes around the program.

Has the off-season controversy around the University affected the team coming into the spring?

RB: Off season controversy has not affected our team approach.  We believe in controlling what we can control. It’s unfortunate that we had to experience that, but our focus has been on getting bigger, stronger and faster.

Who will be tapped to be the head hornet under center this fall replacing Greg Jenkins?

RB: Since Jenkins is gone, Daniel Duhart is lined up to be the starter.  We think Duhart has the skill set to be a good QB.  Of course there is always competition at that spot and we have a transfer in Arsenio Favors we will also compete at that position.

How well has Isaiah Crowell adapted to his transition and will the offense center more around his abilities in 2013?

RB: Crowell has done a good job of adjusting here at ASU. I really believe he loves it here. We found out what he really likes to do as a running back. And yes, he will get more touches this year. Same offense, but using him more in different ways.

Are the additions of Andy Follett and Kevin Ramsey to the coaching staff the final pieces in bringing a championship to Montgomery?

RB: Coach Ramsey and Follet are two very smart coaches.  They have great experience. They have done well in all the places they have been. Two very detailed coaches. I believe they bring what we need to really get us to the next level.

How key has the new football complex and stadium been on recruiting?

With Tuskegee opting out of the Turkey Day Classic for the playoffs.  Do you feel the SWAC should follow and is Stillman the new permanent opponent?

RB: Yeah, I wish the SWAC would follow and allow SWAC schools to go to the playoffs if selected. Several of these student athletes want to play for a National Championship. I know Stillman is permanent for this year.