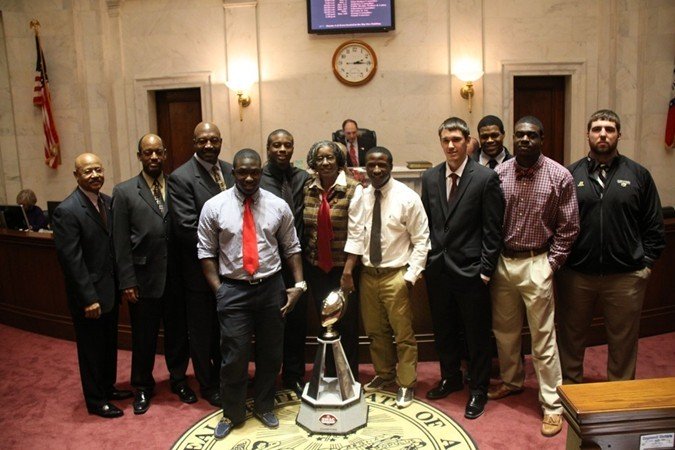 LITTLE ROCK, Ark. – The University of Arkansas at Pine Bluff Golden Lions football team and coaches were honored here at the State Capitol on Wednesday, January 30, by the Honorable Governor Mike Beebe, by the House of Representatives and by the Senate for capturing the 2012 Southwestern Athletic Conference championship.

The Golden Lions captured their first outright football championship in school history last fall, going 10-2 on the season after defeating Jackson State University in the SWAC championship game in Birmingham, Ala. It also marked the first time in school history that a football team at the school garnered 10 victories in one season.

“Today was a very monumental day for us, receiving citations from the Senate and the House of Representatives,” said UAPB head coach Monte Coleman. “It was a great day for the coaching staff and players and a very marketable day for the university. This was very big day for us.”

During their visit to the State Capitol, the Golden Lions were first saluted by the House of Representatives when Henry “Hank” Wilkins IV and other representatives from Jefferson County paid homage to the team. Then, after a standing ovation at the House, the football team was escorted to the front steps of the Capitol for a photo shoot with Governor Beebe, in front of the famed bronzed doors.

After the photo shoot with Governor Beebe, head coach Monte Coleman, Interim Chancellor Dr. Calvin Johnson and Director of Athletics Lonza Hardy Jr., along with team representatives, were escorted on the Senate floor to be recognized by Senator and Pine Bluff native Stephanie Flowers and other members of the Senate.