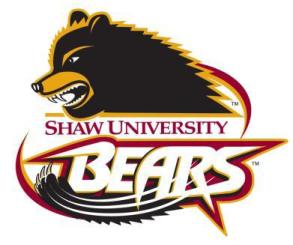 (Saint Joseph, MO) – It wasn’t a game for fans of high-flying offense or, as it turns out, those with heart conditions.

With 19 seconds left, the Shaw University women’s basketball team trailed Metro State by four points. Kyria Buford, who had hit only one of her 16 field goal attempts, hit a three to cut the Metro State lead to one.


After tough defense on the inbounds, Brittney Spencer fouled the Roadrunners’ Brandi Valencia with six seconds left on the clock. Valencia missed both attempts. Demaria Liles pulled down the rebound, tossed the ball to Spencer, and she executed the perfect half-court, cross-court pass to Brittany Ransom. Ransom dribbled once, spun, and hit the layup as the buzzer sounded and the lights went off, giving the Lady Bears the 46-45 win.

The win, Shaw’s first in three appearances in the Elite Eight, moves them into the Final Four and sets up a match against Clayton State Wednesday at 7:00 p.m. (eastern). The game will be broadcast on WSHA-FM and on nationally on ESPNU.

“I knew the ball was coming,” Ransom said of the final shot. “I was the farthest black jersey up the court. I didn’t know how much time was on the clock, but I had to make the basket somehow.”

Buford was less than confident when asked about her key three pointer. “He (Coach Jacques Curtis) never tells me to stop shooting,” she said. “I was wide open. I didn’t think it was going in – I’d missed all those other shots.”

Curtis seemed more nonplussed than the players, “Everybody was getting excited, but the five-point working margin was working for us. As long as we kept them within five, I felt pretty good.”

Both teams kept up a smothering defense the entire game. Shaw was held to only 19 points in the first half – their second lowest half of the season. Both teams shot only 30 percent from the field. But the game was decided on the free throw line, with Metro State hitting only 41.2 percent on the game and missing their last three free throw attempts.

“It was the type of game we anticipated,” Curtis said. “We pride ourselves on defense, and they pride themselves on defense. After we scored only 19 points in the first half, we knew we had to keep up the defensive intensity, but also find a way to score some points.”

Shaw held a lead only twice in the game – once at the buzzer, and once with 9:41 left in the game, when Niesha Searles hit a layup to give the Lady Bears a 33-31 lead. The Roadrunners scored the next six points, rebuilding their lead to four with 7:52 left.

Two minutes later, Ransom hit a three to cut the Metro State lead to one, but the Roadrunners answered quickly with a layup from Jasmine Cervantes.

With 4:15 left, Janelle Harrison drove through the lane and hit a layup to tie the game at 39. Cassondra Bratton hit three free throws over the next minute to rebuild the Metro State lead. Buford then hit her first shot – after 15 misses – sinking a jumper with 2:25 left in the game.

Valencia hit two free throws and Cervantes added another before Buford hit the critical three and sent the Lady Bears on a most inconceivable comeback.

Ransom was the only scorer in double digits for the Lady Bears. Aslea Williams had eight points. Shaw, who was outrebounded by the Roadrunners 50-36, was led in rebounding by Demaria Liles with nine. This was the first game where Liles was not in double figures in either scoring or rebounding.