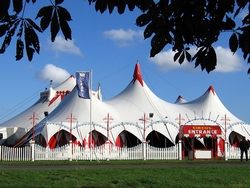 Did you guys hear about the circus that came to Dallas Saturday night at the Cotton Bowl? No, it wasn’t the Ringling Brothers Circus or the UniverSoul Circus. The circus I am referring to is the annual State Fair Classic. It’s a circus that didn’t have any animals, but had plenty of clowns and sideshows. Unfortunately, these types of clowns don’t make you laugh…they actually piss you off.

The 2009 football game between Grambling and Prairie View was as classic and historic as they come. One could not ask for a better game – a different outcome maybe – but that is beside the point. At times the game itself had to take a backseat to the sideshows conducted by clowns who insisted on being seen and heard.


Let’s start with the public address announcer (a local radio personality) who insisted on giving us radio play-by-play over the stadium PA system. It simply wasn’t enough to just give us down and distance.

Then there were the clowns who threw hats from the upper deck of the stadium down to the crowd on the lower level. I guess they never thought about the potential risk for injury that could cause, or the possible spillage of food and drinks that could occur from the initial surprise people might have of items falling down upon them.

But the feature sideshow came from the people who wanted to use the Cotton Bowl’s newly built jumbotron and sound system for all it was worth. I can’t remember how many times promotional gimmicks, celebrity shout-outs and video promotions were conducted while the quarterback was under center calling signals. This is really were things got out of control and is a classic example of the SFC promoter and organizers not having any respect for game being played on the gridiron by both schools.

Panther 88, who has his own unique perspective of the events surrounding the SFC, made one thing very clear:

Class, dignity, pride, respect. THAT is what the SFC used to represent. The monkey show and circus act last night surrounding a GREAT game and atmosphere were totally uncalled for.

Al Wash, promoter of the SFC, and his staff should take some time to read the NCAA Rules and Interpretations handbook. In Section 2, Article 1 of the handbook it clearly states:

There shall be no unsportsmanlike conduct or any act that interferes with orderly game administration on the part of players, substitutes, coaches, authorized attendants or any other persons subject to the rules, before the game, during the game or between periods.

Persons subject to the rules, including bands, shall not create any noise that prohibits a team from hearing its signals.

At the very least, Wash and his staff should consider taking a trip to New Orleans to witness how things are done at the Bayou Classic. If he goes he will likely see how all Bayou Classic sponsors are able to get ample promotional time without affecting game play.

But why do I get the feeling that is not likely to happen?