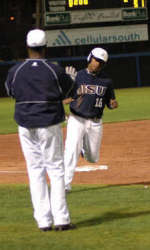 JACKSON, Miss. – The Jackson State baseball team split a twin bill, as the Tigers hosted Chicago State and Southern at the JSU Baseball Complex Sunday afternoon. JSU beat Chicago State 11-9 in the first game and fell 20-5 in the second.

The Cougars countered with a home run in the seventh and three runs in the eighth, making the score 9-5. JSU ended the game with a flurry. In the ninth, JSU scored six runs for the win. Willie WESLEY and Jerome TYES both singled to reach base and scored on a Braneric HOLMES double. Holmes scored on a Brionne JONES triple. Cortez COLE was walked and the game ended on a Jamall Thelwell home run.

In the night cap, the Tigers quickly fell behind to the Jaguars as they posted an eight run led by the fourth inning. In the bottom of the fourth, Thelwell homered to make the score 8-1.The Jaguars would go on to add 12 more runs to Jackson State’s four runs before the umpires ended the game in the ninth inning.

The Tigers had nine hits and committed no errors in the contest. Pitcher Marquis Zachery took the loss. The Tigers now post a SWAC record of 8-5.

Jackson State is set to take on Alabama A&M at 6 pm. at home on Friday for game one of a three game series. Games two and three will be played on Saturday beginning at 1 p.m.